The model is equipped with three spaces for cooking. Each of them of different size and heat power, according to the needs of the users for their gastronomic preparations.

Some users have expressed that when it comes to large amounts of food or several liters of water, this plate has a slow and inefficient operation.

It has been designed with a modern and elegant style, with functional attributes to cook several dishes at the same time. Although there are those who consider that it can be slow for large meals, in general its operation is efficient, which is why it has a positive rating among the user community.

Induction hobs are gaining ground in the kitchen area, as they are elements that heat containers and pots, but not the surface, so they are a safe alternative to avoid burns. This option from the German manufacturer Bosch is recognized among the best induction hobs of 2022 for its functional, practical, safe design and with a size according to small spaces for its use.

The PUC631BB2E hob has been designed by its manufacturer with high-end properties and an aesthetic appearance that denotes elegance and sophistication for the kitchen. All this, through a minimalist and delicate design that is available in black, with white details, with indicators that serve as a guide so that the user knows where to place the containers when cooking the gastronomic dishes of his preference.

In addition to having an elegant design, this hob has a functional and practical style that facilitates and speeds up the user’s time in the kitchen by making use of heat. In this sense, within its design, the Bosch PUC631BB2E induction hob has been equipped with a touch-sensitive control panel. Through this tactile selection, the user will be able to choose a cooking zone and select the power or level of heat that they want just by touching the control with their fingers.

This allows you to easily regulate cooking according to preferences to the desired level, without having to think that the flame will go out or that it has risen too high. With this simple control panel, strategically placed outside of the heat zones, flames and gas have been put to one side. 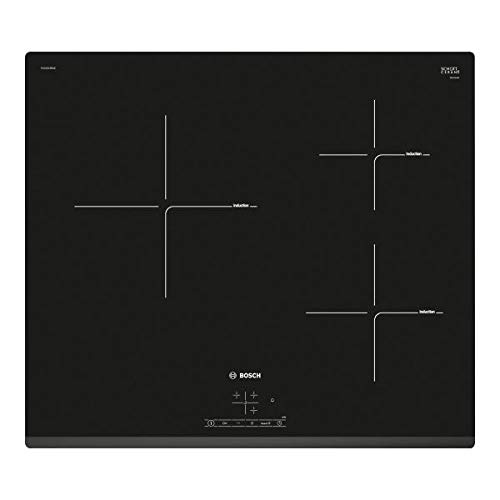 Cooking requires time and dedication, but if you have one of the best induction hobs on the market that is powerful and cooks fast, this time is reduced, so it would be good for you to know the cooking properties and power that this model of the manufacturer Bosch. According to the manufacturer’s specifications, this product is capable of cooking quickly, thanks to the fact that it is equipped with three burners that generate heat for different powers and container sizes, making time in the kitchen more efficient and profitable.

On the one hand, this induction hob has 17 heat levels for each zone. However, the maximum watts or power varies according to the burner in question. In this sense, although the surface of this model is 60 cm, it is divided into three zones that improve and facilitate cooking. Each of these zones has a size, and can be used from the smallest, which has a diameter of 15 cm and is designed for small pots, through a medium-sized one with a diameter of 18 cm and even a large zone, which It is designed for pots of larger size and content, because it has a diameter of 24 cm. All this is possible with a total power of 7400 watts.

The opinions of users about this plate are positive because each zone has individual management and programming, with a warning light, so that the user has an idea of ​​the power and heat level. In this way, according to the cooking needs and type of preparation, any of the three zones can be used so that the heat power is adequate for the requirements. For example, a paella requires that the heat and power be distributed throughout a large paella pan, it being prudent that it is placed in the large heat zone of the Bosch PUC631BB2E induction hob.

The price is an attractive and interesting factor to analyze in this Bosch induction hob alternative because it is competitive due to the functions and the low level of electrical energy consumption that it spends during its operation. Hence, it is a suitable option to save money on the electricity bill, since cooking is faster, with less consumption and more efficient, adapted to the needs of the moment for high-level cooking results.

In addition, the Bosch PUC631BB2E hob is equipped with several functions that make cooking food and the user’s life easier, such as memory, automatic start, control system lock to prevent accidents, such as involuntary touches that increase the caloric power of one of the areas and food is burned, as well as to avoid manipulation by children.

It is also equipped with a cooking time programming function individually according to the zone used. In this way, the selected zone will turn off when the time set by the user has elapsed. Therefore, you can leave something cooking with programming and go out to do some activity, with the certainty that the burner will be off when you return and the food is ready. Similarly, it has automatic safety disconnection.

On the other hand, the plate is enabled with a sprint function, which serves to reduce the time of use of heat when it comes to large amounts of water or other liquids, reducing the time of use by up to 50%. 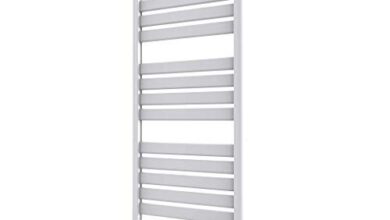 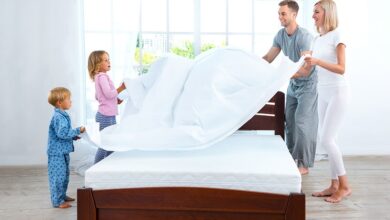 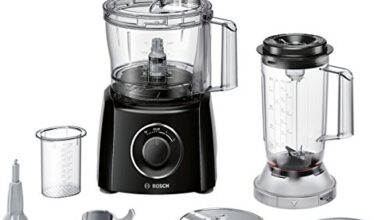